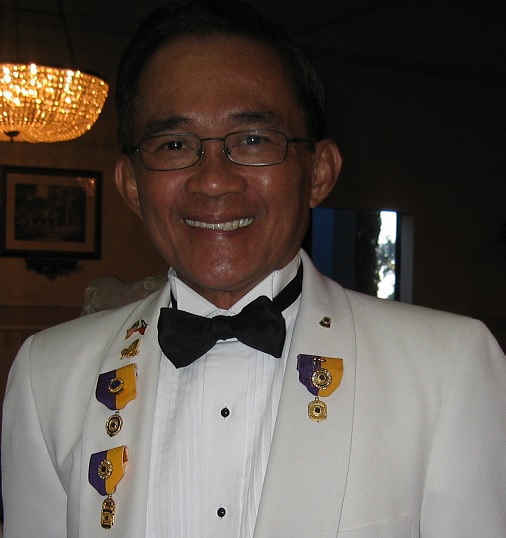 He hails from the Ilocos Region and La Union.  He resides at Maysan, Valenzuela City, Bulacan since 1968.  He graduated in the Elementary and High School of San Alberto Magno Academy at Tubao, La Union.  At his younger age of 6, he is fond of drawing, painting, even craftsmaking.  He took up Architecture in 1957 at Mapua Institute of Technology and later transferred to National University. He discontinued his career and later worked in the Bureau of Lands office at Bocaue, Bulacan as Draftsman and later at Santa Maria, Bulacan. In 1960-1964 he became a Team Leader in the Photogrametric Survey, relocation and as recorder of Geodetic Engineers.

In 1964, he applied as a Draftsman in Certeza Surveying Company as Cartographer, Topographer.  He became an Assistant Chief Draftsman during those years. He got his experience as a part time designer at Crizam Metalcraft maker of award plaques, trophies and other engraving works. In 1968 he resigned at Certeza Surveying and put up his own business “The Rivera Mastercraft” and opened his office at Lerma, Sampaloc, Manila. He later rented a spacious shop at the family compound in Karuhatan, Valenzuela City and got married to Ms. Guadalupe Peňa, blessed with 4 children (2 boys and 2 girls) and 7 grandchildren.

As of today all his children are working professionals. His eldest daughter, Marian is working at Crown Casino in Melbourne, Australia and husband Romel is working in a glass company. His oldest son, Joseph, is now the president of “The Award Master, Inc.” in San Diego, California. His youngest son, Francis, has his own business, also in San Diego, doing Neons and Billboard Signs.  His youngest daughter, Marinel, is a student at Southwestern College in Chula Vista, CA and working in Sharp Hospital.

Because of his commendable artcraft and outstanding accomplishments he received the prestigious award  “Best Designed Product Award Winner” in 1973 from NACIDA in Bulacan.  He is also an awardee of “Pio Valenzuela Award” and “The National Ulirang Ama Award” in 2002 respectively.  As a civic leader, he joined the International Organizations like the Obando Lions Club in 1973, Velenzuela Jaycees in 1974, Charter Member of the Rotary Club of Valenzuela South in 1988, and organizer of Kiwanis Club of Valenzuela in 1979, where he also served as president. He also served as president of the Rotary Club of Valenzuela South in 2010-2011. Through his wide experiences on these organizations, he is very instrumental in the organizations of Lions Clubs in San Diego County, California in which he is dubbed as “The Godfather of Fil-AM Lions Clubs”.

Jim was born to Robert Gail Ashcraft and Alice Jane Laulis Ashcraft at home on December 16, 1943 in Shinnston, W. Va., interrupting his brother's birthday party.  At the age of 13, his family moved to the Sacramento area.  He graduated from El Camino High School in 1961 where he played football, basketball and baseball.  His senior year he was selected to the Sacramento All City football team, the Sacramento All City Basketball team and the All Northern California Basketball team.  Jim attended UC Berkeley graduating with a B.S. in Civil Engineering in 1966.  A walk-on member for the CAL basketball team, he was selected Most Inspirational Player his junior and senior years and was elected team captain his senior year.  After graduation, Jim served in the U.S. Peace Corps for two years in Sicuani, Peru, about 80 miles south of Cuzco.  He worked with the Peruvian government agency and was involved mobilizing and teaching the local residents in the construction of schools, secondary roads, irrigation canals, and drinking water systems.  He learned to speak Spanish and some of the indigenous dialect.  Jim obtained a M.S. degree in Civil Engineering from the University of Washington, Seattle, in 1972 and later moved to San Diego.  He became a Professional Civil Engineer in California in 1973 and worked as a consulting engineer designing sewage treatment plants, potable water treatment plants, water recycling facilities, pump stations and desalination systems.  He worked for 40 years at multiple consulting engineering companies including Engineering Science, Lowry & Associates, Miramar Engineering, HYA Consulting Engineers (a partner in the firm for 13 years), Dames & Moore / URS, Tetra Tech and IEC.  Jim met his wife, Fran, while folk dancing in Balboa Park.  He continued his fondness for singing and dancing as a member of the Rhythm -Aire Players in Pacific Beach for 12 years.  For over 20 years, he has been an active member of Lions Club International, District 4-L6, serving as Zone and Region Chairs and was current President of the San Diego Mission Lions Club.  As Lions, Jim and Fran became involved with Lions In Sight of California and Nevada, which promotes the collection of used eye glasses for the purpose of recycle and reuse, providing no cost primary eye care and glasses for people in need in developing countries.  Together they participated in 22 mission eye clinics.  For many years, Jim has been a member of Hardhats Toastmasters. He was also an active member of the La Jolla Presbyterian Church and a member of their Facilities Maintenance Committee.  Jim loved traveling and camping with his family plus teaching his children to ski and play golf.  He participated in Indian Guides and Boy Scouts with his son.  He was an avid sports fan but especially enjoyed golfing with friends and relatives whenever possible.  Jim's incredible memory and sense of humor endeared him to those he met.  In recent years he and his wife enjoyed travels to China, Greece, Turkey, Israel and Egypt.  Jim was preceded in death by his father, Robert Gail Ashcraft, and his mother, Alice Jane Ashcraft (Laulis).  He is survived by his devoted wife of 42 years, Fran (Widener); son, Gregory James (fiancee Michelle Esquivil) of Hillsboro, OR; daughter, Kimberly Anne (fiancee Warren Krantz) of Phoenix, AZ; brother, David Robert Ashcraft (wife Janet Shelton) of Culver City, CA; and sister, Carolyn Jane Garthwaite (Ashcraft) of Coupeville, WA.
Powered by