The idea came about when Lion Frank Paredes Rivera, retired and inflicted with an illness, decided to permanently reside back in the Philippines. A send-off party was given for him by many Lions from many different Lions Clubs last January 2013. Lion Frank has been a Lion for over 40 years; beginning his affiliation to the organization from the time when he was still living in the Philippines. He continued his Lions career when he immigrated to the United States in 1991 joining the National City Host Lions Club as the only Filipino member. He was the prime organizer of the first predominantly Filipino-American Lions Club in District 4-L6, the Paradise Valley Lions Club. From here, many Fil-Am Lions Clubs developed. It is safe to say that the charter of these Fil-Am Lions Clubs helped save District 4-L6. To date there are 13 predominantly Fil-Am Lions Clubs in District 4-L6.

Keen and enthusiastic on education, Lion Frank never fails to incorporate an educational project on his humanitarian & medical missions to the Philippines. During the send-off party, the idea was conceived to create a scholarship project in his name. As the idea evolved, it was decided to name the project the SAN DIEGO LIONS SCHOLARSHIP FOUNDATION so as to include other deserving Lions of recognition in the future. The foundation will add other fellowships in the name of distinguished Lions who have made an impact on education or simply as a dedicated Lions. The Frank P. Rivera Fellowship (FPRF) will be the first to be recognized.

(Please click to the other pages of this web site for more information on the scholarship grant and for our Fellowships).


Today, April 9, 2016, we are honored and proudly announcing our new fellow - Lion Jim Ashcraft.  Please read more about Jim in this Website. 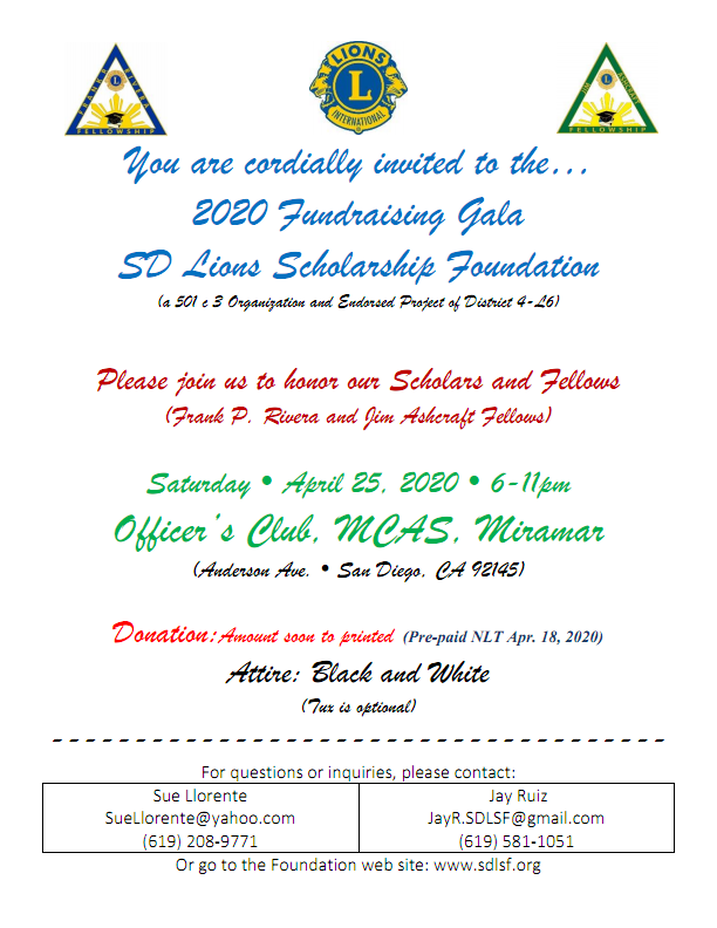